You are here: Home / Daily Life / Xpu Ha for music, the beach and Tai Chi 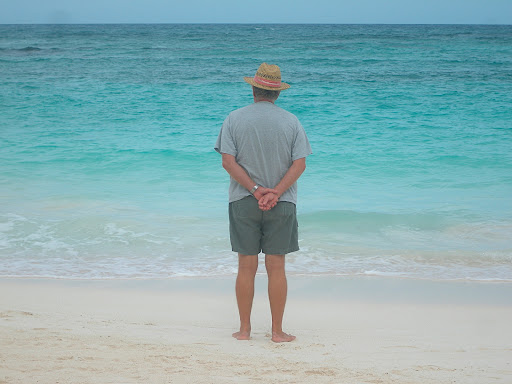 Sunday, June 8, with a very, very grey sky, we took a colectivo south about 20 minutes from Playa del Carmen to Xpu Ha. None of the six of us had been there before, so when the driver dropped us on the highway at the Xpu Ha Palace Hotel we thought we had arrived. The hotel is an all inclusive resort so we were not allowed in without a bracelet. The guard said the road we wanted was 700 meters down the highway so we started walking. Part of the party decided this was not good and got a taxi to take them directly to the beach, but Jim and I found a private road we walked down that ended at a deserted mini golf course and the beach. There were several dogs throughly enjoying the beach, a couple swimmers, and several fishing boats anchored off a beautiful stretch of white sand. We walked to the only restaurant and asked if this was where there would be music. They assured us the band was arriving and would begin in half an hour. My Tai Chi teacher, Joseph, plays the steel drum with the band, and hearing him was part of my incentive to go there. We found the rest of our party already seated at the restaurant and all settled down to lunch. A little later we were joined by Susan and Adrianna, fellow members of the Tai Chi class, who had driven down. If one comes by the “marked” road, each person pays 25 pesos and receives a wrist band which can be cashed in for face value at the restaurant. I ordered Nachos con Camarones (shrimp with corn chips, refried beans, cheese, jalapeno peppers and salsa on the side) and Jim got a hamburger. Then…. the music began. 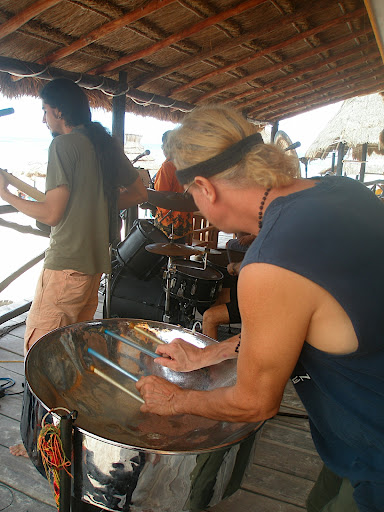 It was wonderful! Soon Susan and I were up dancing with a group of people from Chetumal who simply could not remain seated. They were having way too much fun, so we joined them for some very energetic movements and lots of smiles and high fives. The band took a break and went swimming in the sea, while the three of us Tai Chi students practiced this fine art of movement on the beach. A good time was had by all. 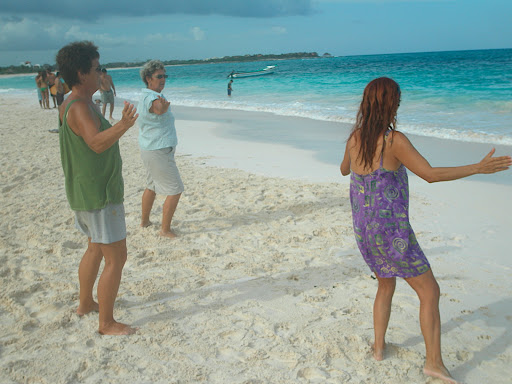