You are here: Home / Daily Life / Yoga and Tai Chi in Paradise 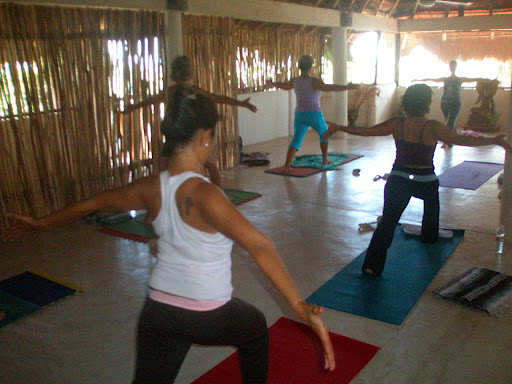 Just before we went back to Philly for New Years, I met a Canadian woman, Susan. She is about my age and told me she was practicing yoga and Tai Chi here in Playa del Carmen. When I returned, I attended a class with her at Palapa Suuk, a large, open, palapa covered room on the third floor of a hotel located on Calle 46 and Ave. 5. The young woman who instructs, Melanie, is from Texas, living here now and teaching yoga in the morning and English in the afternoon. She is inspired. I have never had two classes alike, yet I have stretched every muscle in my body (even eyeballs). Sometimes the classes are in Spanish which is also helpful. The price is right: $50 US a month for unlimited class attendance, of which her sessions are only a few on the extensive schedule. 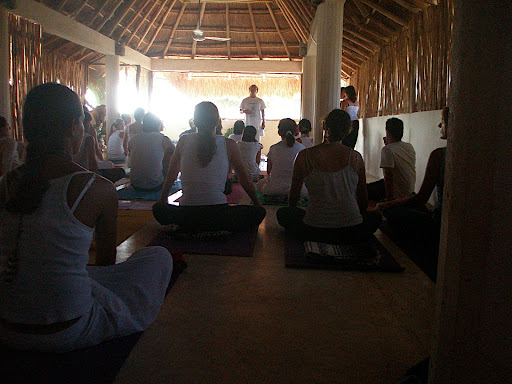 For the Spring Solstice there was a celebration at Palapa Suuk with 80 or 100 people doing a series of postures called Sun Salutations. We were led by the four teachers from the center and attempted to finish 108 of these series of postures. There were people of all sizes and shapes, various ages, and multiple nationalities. I must admit I stopped somewhere in the middle to rest, but continued on and finished with sweat dripping from my nose.

I first saw Tai Chi in Geneva, Switzerland on a trip around Europe. The bus pulled in early in the morning and passed a shaded park where at least 30 people were practicing in unison the magic of Tai Chi. I have thought often of that image and when the opportunity arose here, I jumped at it. Our teacher, Joseph, is a musician and martial arts instructor. There are often only 3 or 4 of us in class. We begin with more than half the class time spent stretching in exercises of patience and endurance. Then the moves begin. I have been pleasantly surprised that the moves do flow. Remembering sequence has been a challenge, but we go slowly adding just a few new moves every week.

Together, these practices have opened not only the tightness of my muscles, but also my heart.